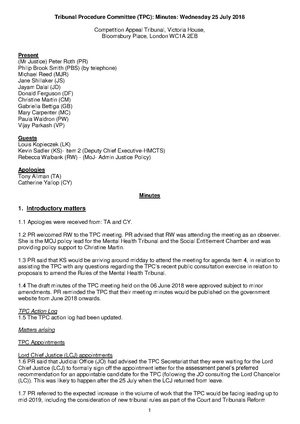 Minutes of 25/7/18 meeting, including the news that the proposals to abolish pre-hearing medical examinations and to reduce the number of oral hearings had been abandoned (the context for this included the ongoing MHA review, Rethink's FOI requests and the overwhelmingly negative response to the consultation).

4.1 The TPC public consultation had considered 1) abolishing Pre-Hearing Examinations and 2) enabling judges to make more decisions on the papers without an oral hearing. CM said that the consultation had ended on the 14 June 2018. The TPC Secretariat received approximately 200 replies. A HSWSG meeting had been held on the 18 July to consider the replies, and a schedule of the replies prepared by the TPC Secretariat had been circulated to members of the TPC.

4.2 CM said that she had attended a meeting on 19 July 2018 with the independent team conducting the review of the Mental Health Act 1983. The purpose of the Review is to consider how practice could be improved in the MHT for service users and professionals. The attendees included Professor Sir Simon Wessely (review Chair) and Alex Keene (review legal advisor) and government officials.

4.3 PR said that the TPC Secretariat had replied to the second Freedom of Information request regarding the recent TPC consultation for procedural reform to the MHT.

4.4 CM thanked the MoJ Policy attendees for the update paper that had been circulated to the HSWSG and TPC. The paper detailed the Parliamentary interest in the TPC consultation and also provided a summary.

4.5 KS joined the meeting as a guest and answered questions from the TPC members in relation to the two proposed changes to MHT rules. PR thanked KS for his assistance in clarifying the issues. (KS left the TPC meeting).

4.6 The TPC noted that the consultees were overwhelmingly opposed to the rule changes. After full discussion and reference to the reasons given in various consultation responses, the TPC agreed that it would not be appropriate to make either of the proposed rule changes.

4.7 CM said that she would start preparing a draft response. The plan was to have a draft which the TPC would consider at their next scheduled meeting, with the aim for the TPC to publish its response in the autumn.