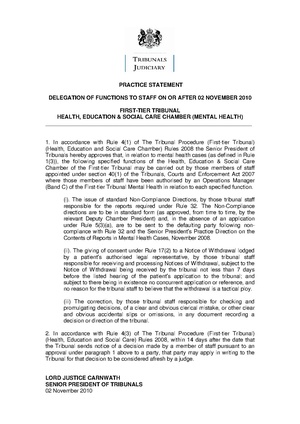 Delegation of functions On 2/11/10 the Senior President of Tribunals issued a Practice Statement delegating the following functions to the appropriate administrative staff: (1) the issue of non-compliance directions in relation to late reports; (2) the giving of consent to a notice of withdrawal if (a) lodged by a legal representative, (b) received not less than seven days before the hearing, (c) there is no concurrent application/reference, (d) there is no reason to believe it is a 'tactical ploy'; (3) the correction of clerical mistakes, and accidental slips and omissions, in written decisions and directions, if clear and obvious. Within 14 days of the administrative decision being sent, the receiving party may apply for the decision to be considered by a judge. Superseded by Practice Statement: Delegation of Functions to Staff and to Registrars on or after 10 June 2014 (10/6/14).

DELEGATION OF FUNCTIONS TO STAFF ON OR AFTER 02 NOVEMBER 2010

1. In accordance with Rule 4(1) of The Tribunal Procedure (First-tier Tribunal) (Health, Education and Social Care Chamber) Rules 2008 the Senior President of Tribunals hereby approves that, in relation to mental health cases (as defined in Rule 1(3)), the following specified functions of the Health, Education & Social Care Chamber of the First-tier Tribunal may be carried out by those members of staff appointed under section 40(1) of the Tribunals, Courts and Enforcement Act 2007 where those members of staff have been authorised by an Operations Manager (Band C) of the First-tier Tribunal Mental Health in relation to each specified function.

(i). The issue of standard Non-Compliance Directions, by those tribunal staff responsible for the reports required under Rule 32. The Non-Compliance directions are to be in standard form (as approved, from time to time, by the relevant Deputy Chamber President) and, in the absence of an application under Rule 5(3)(a), are to be sent to the defaulting party following noncompliance with Rule 32 and the Senior President’s Practice Direction on the Contents of Reports in Mental Health Cases, November 2008.

(iii) The correction, by those tribunal staff responsible for checking and promulgating decisions, of a clear and obvious clerical mistake, or other clear and obvious accidental slips or omissions, in any document recording a decision or direction of the tribunal.

2. In accordance with Rule 4(3) of The Tribunal Procedure (First-tier Tribunal) (Health, Education and Social Care) Rules 2008, within 14 days after the date that the Tribunal sends notice of a decision made by a member of staff pursuant to an approval under paragraph 1 above to a party, that party may apply in writing to the Tribunal for that decision to be considered afresh by a judge.

Title: Practice Statement: Delegation of functions to staff on or after 2 November 2010