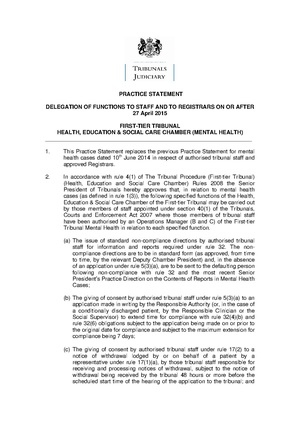 Delegation of functions The Practice Statement sets out the functions which may be carried out by clerks and registrars at the Tribunal secretariat. It replaces Practice Statement: Delegation of Functions to Staff and to Registrars on or after 10 June 2014 (10/6/14). In force 27/4/15. The two changes are: (1) para 2(a) (in relation to standard non-compliance directions) now refers to "the defaulting person" rather than "the defaulting party"; and (2) para 2(c) (in relation to consent by clerks to withdrawal) now states "...subject to the notice of withdrawal being received by the tribunal 48 hours or more before the scheduled start time of the hearing of the application to the tribunal; and subject to the case not being part-heard, there being in existence no concurrent application or reference, and no other reason for tribunal staff to believe that consent to the withdrawal should be refused, such as it appearing that the withdrawal is merely tactical" (the "48 hour" text replaces "not later than 4.30pm on the day before any listed hearing" and the other italicised text is new). Superseded by: Practice Statement: Delegation of Functions to Registrars, Tribunal Case Workers and Authorised Tribunal Staff on or after 8 July 2016 (7/7/16).

Title: Practice Statement: Delegation of Functions to Staff and to Registrars on or after 27 April 2015