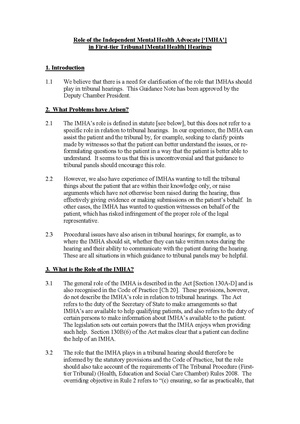 IMHAs at tribunals This guidance, issued in May 2011, clarifies the role that IMHAs should play in tribunal hearings. It contains the following main headings: (1) Introduction; (2) What Problems have Arisen?; (3) What is the Role of the IMHA?; (4) Attendance at the Hearing; (5) Relationship with the Legal Representative; (6) Giving Evidence; and (7) Access to the Tribunal’s Decision. The guidance, while acknowledging that an IMHA may be a 'representative' within the Tribunal Procedure Rules, is based on an expectation that ordinarily the IMHA should play a role distinct from the role of the legal representative.

1.1 We believe that there is a need for clarification of the role that IMHAs should play in tribunal hearings. This Guidance Note has been approved by the Deputy Chamber President.

2. What Problems have Arisen?

2.1 The IMHA’s role is defined in statute [see below], but this does not refer to a specific role in relation to tribunal hearings. In our experience, the IMHA can assist the patient and the tribunal by, for example, seeking to clarify points made by witnesses so that the patient can better understand the issues, or re-formulating questions to the patient in a way that the patient is better able to understand. It seems to us that this is uncontroversial and that guidance to tribunal panels should encourage this role.

2.2 However, we also have experience of IMHAs wanting to tell the tribunal things about the patient that are within their knowledge only, or raise arguments which have not otherwise been raised during the hearing, thus effectively giving evidence or making submissions on the patient’s behalf. In other cases, the IMHA has wanted to question witnesses on behalf of the patient, which has risked infringement of the proper role of the legal representative.

2.3 Procedural issues have also arisen in tribunal hearings; for example, as to where the IMHA should sit, whether they can take written notes during the hearing and their ability to communicate with the patient during the hearing. These are all situations in which guidance to tribunal panels may be helpful.

3.1 The general role of the IMHA is described in the Act [Section 130A-D] and is also recognised in the Code of Practice [Ch 20]. These provisions, however, do not describe the IMHA’s role in relation to tribunal hearings. The Act refers to the duty of the Secretary of State to make arrangements so that IMHA’s are available to help qualifying patients, and also refers to the duty of certain persons to make information about IMHA’s available to the patient. The legislation sets out certain powers that the IMHA enjoys when providing such help. Section 130B(6) of the Act makes clear that a patient can decline the help of an IMHA.

3.2 The role that the IMHA plays in a tribunal hearing should therefore be informed by the statutory provisions and the Code of Practice, but the role should also take account of the requirements of The Tribunal Procedure (First-tier Tribunal) (Health, Education and Social Care Chamber) Rules 2008. The overriding objective in Rule 2 refers to “(c) ensuring, so far as practicable, that the parties[1] are able to participate fully in the proceedings” and the tribunal must, of course, give effect to the overriding objective in exercising its powers. In general, therefore, the tribunal should enable and support the IMHA in the discharge of his or her legitimate functions before the tribunal.

3.3 Nevertheless, grey areas in relation to the conduct of individual tribunal hearings are likely to arise occasionally. These might include issues relating to the IMHA’s (1) attendance at the hearing; (2) seating arrangements; (3) relationship with the legal representative; (4) role in relation to any procedural issues; (5) giving of evidence; (6) asking questions and addressing the panel; and (7) right of access to the tribunal’s decision. These issues are, therefore, considered below.

4. Attendance at the Hearing

4.1.1 There is nothing in the Act or the Code specifically conferring on an IMHA the right to attend a tribunal hearing.[2] Rule 38(3) permits a Tribunal to determine who is permitted to attend (all or part of) a private hearing and to direct the exclusion of certain persons. It is not suggested that an IMHA needs to apply to the tribunal in advance for permission to attend a hearing. However, it would be appropriate for the tribunal judge, before commencing, to check with the patient that they do wish the IMHA to be present for the hearing, and also (in broad terms) to clarify the role that the patient and their legal representative expect the IMHA to play.

4.1.2 There are specific statutory provisions governing the IMHA’s access to the patient’s records, and a requirement that a patient with capacity must consent to the IMHA inspecting his or her records [see s. 130B(4)].

4.1.3 There may also be issues relating to the disclosure of evidence which would make it necessary to consider whether the IMHA should remain in the hearing room, or otherwise have access to evidence which is not to be disclosed to the patient [see below].

4.1.4 The Code of Practice refers to IMHAs “representing [patients] and speaking on their behalf”.[3] This suggests that an IMHA should be able to sit close to the patient and communicate with them during the hearing. It would be appropriate for seating arrangements in the hearing room to reflect this role.

4.1.5 However, the Code of Practice also makes clear that the involvement of an IMHA does not affect the patient’s right to advice from a lawyer.[4] The panel should be mindful of this and the tribunal judge should ensure that the seating of the IMHA close to the patient does not prevent access to the patient by the legal representative. It is suggested that the tribunal judge should ask the legal representative and the IMHA if they are happy with the seating arrangements prior to the commencement of the evidence.

5. Relationship with the Legal Representative

5.1.1 It is to be hoped that there will have been a discussion prior to the commencement of the hearing as to the role to be played by the IMHA. It would be appropriate for the tribunal judge to make a few opening remarks emphasising that the legal representative has the formal representational role, that the IMHA is there to assist the patient, the legal representative and the tribunal to understand each other - and that, if they need any time to consult in private, they should just ask.

5.1.4 It should also be borne in mind that under Rule 11(1) an IMHA could themselves be the “representative” of a patient at the hearing, or that an IMHA might attend to assist a patient at a hearing, with the permission of the tribunal, under Rule 11(5). This raises issues in respect of disclosure [see below].

5.1.5 In general, the role of the IMHA in relation to the conduct of the hearing would be that of ensuring, if necessary, that the patient has understood the issues, and assisting with the communication of the patient’s views to the tribunal. However, there are a few situations where consideration of the IMHA’s status will itself be a relevant issue for the tribunal in deciding how to proceed. Thus, in respect of an application for a Rule 14 ruling for non-disclosure, the panel should bear in mind that the tribunal may not disclose to the IMHA those documents which are to be withheld from the patient (and which can only be disclosed to the appointed representative under Rule 11). The tribunal would have power to exclude the IMHA from the relevant part of the proceedings under Rule 38(4)(c) in these circumstances. The only exception would be if the IMHA is appointed as the “representative” under Rule 11. This rare situation is likely to create considerable difficulty since, if the IMHA receives a document which is not to be disclosed to the patient, they will have had to undertake under Rule 14(5) not to disclose it or its contents to the patient. The IMHA might well consider that this undertaking conflicts with their general duty to the patient and, if so, the tribunal will be unable to disclose information to the IMHA because they will not be satisfied that the representative will act in accordance with Rule 14(6).[5] This situation should be avoided to protect the patient’s rights to effective legal representation.

5.1.6 Other issues may arise from the fact that the IMHA is not a “party” to the proceedings under the Rules. The overriding objective [Rule 2] requires “the parties” to co-operate with the tribunal; some of the case management powers [Rule 5] relate to “parties” only. Reasonable notice of hearings is required to be sent to the parties [Rule 37]. Finally, it may be appropriate for the tribunal to remind the IMHA that, under Rule 14(7), information about the case may not be made public unless the tribunal so directs, as there would not appear to be any agreement as to confidentiality as between the patient and the IMHA.

5.1.7 The IMHA may wish to take notes of the evidence given in the hearing. It is clear that in some circumstances this may be justified; for instance, when a patient finds it hard to follow and digest all the evidence at the time, and it may be part of the IMHA’s role to review the evidence with the patient in private later. However it is suggested that the correct approach will depend upon the circumstances of the individual case, and it would be proper for the judge to enquire why the IMHA needs to take notes, and to emphasise the need for complete confidentiality.

6.2 It is suggested that, if these circumstances arise without warning, the judge should stop the IMHA, and remind him or her that neither of the parties (patient or Responsible Authority) may wish them to give evidence, and if the panel is to seek evidence on its own initiative, it must have cogent reasons for doing so. Moreover, the giving of evidence may well result in the IMHA being cross-examined by the patient’s legal representative and by any person representing the Responsible Authority, and being questioned by the panel. Should the IMHA still wish to give evidence, or remain undecided, the legal representative may then wish to have a private consultation with the IMHA in order to ensure that the representative understands the nature of any evidence the IMHA wishes to give, and to enable the representative to decide how they wish to proceed - for example, whether they wish to call the IMHA to give evidence, or whether there may be a better way to place the relevant information before the panel. The tribunal may regulate its own procedure [Rule 5(1)] and may give directions as to the admission and exclusion of evidence [Rule 15].

Asking Questions and Addressing the Panel

7.1 The written decision, containing the formal reasons, will not be sent to the IMHA, as they are not a party to the proceedings. Of course, the patient may subsequently show the decision to the IMHA, if the patient so wishes.

Detail as to the provision of IMHA’s and their role is available on: http://www.dh.gov.uk/en/Healthcare/Mentalhealth/DH_091895

Action for Advocacy’s Code of Practice and Quality Standards for Advocacy Schemes: http://aactid166b.webconexion.co.uk/articleServlet?action=list&articletype=23

Independent mental health advocates: Department of Health’s supplementary guidance on access to patient records under section 130B of the Mental Health Act 1983: http://www.dh.gov.uk/en/Publicationsandstatistics/Publications/PublicationsPolicyAndGuidance/DH_098828