Online forum | Latest topic on forum: Can a NR delegate to the local authority | News 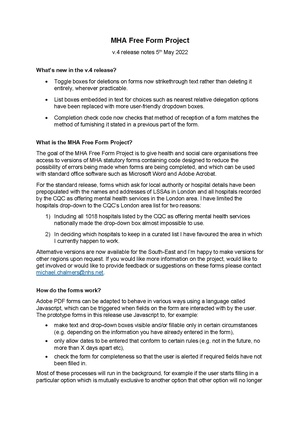 FFP release notes and user guide The release notes contain this list of updates: (1) Toggle boxes for deletions on forms now strikethrough text rather than deleting it entirely, wherever practicable; (2) List boxes embedded in text for choices such as nearest relative delegation options have been replaced with more user-friendly dropdown boxes; (3) Completion check code now checks that method of reception of a form matches the method of furnishing it stated in a previous part of the form. The forms are available on the Mental Health Act 1983 Statutory Forms page.