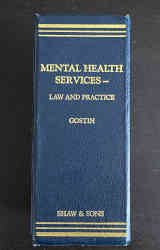 Larry Gostin, Mental Health Services: Law and Practice (Shaw & Sons, supplement issue no 18, June 2000). Professor Lawrence Gostin and Shaw & Sons have kindly given permission for this book to be reproduced on Mental Health Law Online. The book is out of print and the law stated in it out of date, but it is being reproduced here for historical and academic interest.

I used two volumes from different sources, each updated to issue 18, to create one perfectly-updated version, and am 99% certain that all the scanned pages are the correct ones. The scanned documents have been OCR'd so you can search the text. Richard Jones kindly sent pages C21-24 which were missing from both volumes.

PART I: The structure of the mental health services

PART VII: The rights of the patient

Appendix D: Forms and records required under the Mental Health Act 1983 and the Registered Homes Act 1984

Appendix E: Summary of procedural requirements in respect of compulsory admission to hospital and guardianship

All books can be viewed on the Books page