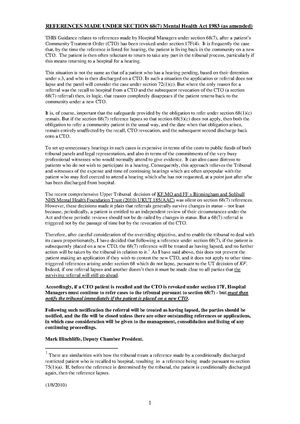 Unlawful guidance on references On 22/7/10 the Deputy Chamber President issued guidance to the effect that a reference made under s68(7), triggered by the revocation of a CTO, will be treated as having lapsed if the patient subsequently is placed on a new CTO. The guidance was amended slightly on 22/9/10. The guidance also asserts that (1) ignoring the reference means that it is treated for the purposes of s68(3)(c) as if it had never been made, so that the normal s68(2) six-month duty to refer still applies; (2) if a six-month reference is made prematurely then, even if the six months will have elapsed by the time of the hearing, the Tribunal must strike out the proceedings under Rule 8(3)(a) for lack of jurisdiction; (3) a reference made under s75(1)(a), triggered by the recall of a conditionally-discharged patient, lapses if the patient subsequently is again conditionally discharged. Insofar as it relates to the lapsing of references, this policy is unlawful: PS v Camden and Islington NHS Foundation Trust [2011] UKUT 143 (AAC).

Changes between the 22/7/10 and 22/9/10 guidance are shown by strikethrough and [square brackets]. Other text formatting is as in the source document.

THIS Guidance relates to references made by Hospital Managers under section 68(7), after a patient’s Community Treatment Order (CTO) has been revoked under section 17F(4). It is frequently the case that, by the time the reference is listed for hearing, the patient is living back in the community on a new CTO. The patient is then often reluctant to return to take any part in the tribunal process, particularly if this means returning to a hospital for a hearing.

This situation is not the same as that of a patient who has a hearing pending, based on their detention under s.3, and who is then discharged on a CTO. In such a situation the application or referral does not lapse and the panel will consider the case under section 72(1)(c). But where the only reason for a referral was the recall to hospital from a CTO and the subsequent revocation of the CTO (a section 68(7) referral) then, in logic, that reason completely disappears if the patient returns back to the community under a new CTO.

To set up unnecessary hearings in such cases is expensive in terms of the costs to public funds of both tribunal panels and legal representation, and also in terms of the commitments of the very busy professional witnesses who would normally attend to give evidence. It can cause distress to patients who do not wish to participate in a hearing and can arguably amount to an infringement of their right to respect for private and family life. [Consequently, this approach relieves the Tribunal and witnesses of the expense and time of continuing hearings which are often unpopular with the patient who may feel coerced to attend a hearing which s/he has not requested, at a point just after s/he has been discharged from hospital.]

The recent comprehensive Upper Tribunal decision of KF,MO and FF v Birmingham and Solihull NHS Mental Health Foundation Trust (2010) UKUT 185(AAC) was silent on section 68(7) references. [However, these decisions made it plain that referrals generally survive changes in status – not least because, periodically, a patient is entitled to an independent review of their circumstances under the Act and these periodic reviews should not be de-railed by changes in status. But a 68(7) referral is triggered not by the passage of time but by the revocation of the CTO.]

Therefore, after careful consideration of the overriding objective, and to enable the tribunal to deal with its cases proportionately, I have decided that following a reference under section 68(7), if the patient is subsequently placed on a new CTO, the 68(7) reference will be treated as having lapsed, and no further action will be taken by the tribunal in relation to it.[1] As I have said above, this does not prevent the patient making an application if they wish to contest the CTO, and it does not apply to other references arising under section 68 which do not lapse, pursuant to the UT decision of KF. [Indeed, if one referral lapses and another doesn’t then it must be made clear to all parties that the surviving referral will still go ahead.]

Accordingly, if a CTO patient is recalled and the CTO is revoked under section 17F, Hospital Managers must continue to refer cases to the tribunal pursuant to section 68(7) - but must then notify the tribunal immediately if the patient is placed on a new CTO.

Following such notification the referral will be treated as having lapsed, the parties should be notified, and the file will be closed unless there are other outstanding references or applications, in which case consideration will be given to the management or[,] consolidation [and listing] of any continuing proceedings, under case management powers.

68 Duty of managers of hospitals to refer cases to tribunal

(1) This section applies in respect of … (c) a community patient and (d) a patient whose CTO is revoked under section 17F;

(2) On expiry of the period of six months beginning with the applicable day, the Managers of the hospital shall refer the patient’s case to a Mental Health Tribunal…

application for admission for treatment –

(c) in the case of a community patient, or a patient whose CTO is revoked under section 17F, the day mentioned in (i) or (ii) above, as the case may above;

(6) The Managers of the hospital shall also refer the patient’s case to a Mental Health Tribunal if a period of more than three years (or, if the patient has not attained the age of 18 years, one year) has elapsed since his case was last considered by such a tribunal, whether on his own application or otherwise.

(7) If, in the case of a community patient, the CTO is revoked under section 17F above, the managers of the hospital shall also refer the patient’s case to a Mental Health Tribunal as soon as possible after the order is revoked.